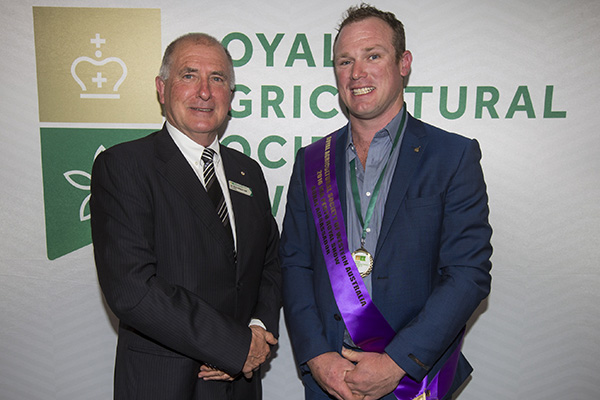 A mid-west farmer with a passion for sustainable, progressive agriculture has been named Rural Ambassador of the year. Brad Kupsch, 29, representing Chapman Valley Agricultural Society, is a mixed grain and livestock farmer at Tara Limousin Stud and Black Tara Angus, based in the Allanooka region.

In his new role, Mr Kupsch is keen to inspire children and young adults to embrace the agricultural lifestyle in an array of professions. “I want farmers to be viewed with the same professionality as doctors, lawyers and other top end occupations,” he said. “Not enough credit is given to farmers for the good work they do.”

In his speech at the awards presentation at Claremont Showground Mr Kupsch emphasised how diversification creates strength and opportunity. “When a grain grower diversifies into beef, his business gains diversity and strength from the ever tumultuous commodity markets,” he said. “More diverse enterprises call for more advisory specialists to help, such as agronomists, vets and nutritionists. “A calling for more skilled labour and advisory positions would not only create interest in agricultural uni degrees, but jobs located in rural settings.”

Mr Kupsch said greater intensification creates greater room for more siblings to return to farm and more employment opportunities in general. He said it could lead to gains not just for the farmer, but the wider community. Gains include more people in town, more productive use of land rather than just larger scale expansion, and increasing the chances of farmers selling their story better.

Mr Kupsch is looking forward to attending the IGA Perth Royal Show and helping to give city people a glimpse of country life. He has fond memories of attending his local agricultural show as a kid, including accidentally squashing his mum’s cakes enroute. He joked that for this reason he would stay away from the Cookery Pavilion.

Mr Kupsch was one of five finalists competing for the honour to be this year’s rural ambassador.

South-West group finalist Stephanie Kennaugh, 20, representing the Margaret River & Districts Agricultural Society, was runner-up. A sales manager with Margaret River Venison Farm, Ms Kennaugh said as a fourth generation farmer she sees enormous untapped potential for agribusiness. “But to utilise this we need to change,” she said. “Reduce red tape, encourage the innovation of youth and reassess our mindset.”

The Rural Ambassador Award is about discovering the next generation of rural leaders, passionate young adults who can represent and promote their community, region and State. It is supported by the Perth Rendezvous Hotel, Scarborough, and coordinated by the Royal Agricultural Society of WA.

The competition has five heats held in regional areas with 63 agricultural societies across the State taking part in the competition. Mr Kupsch will represent WA at the National Finals.