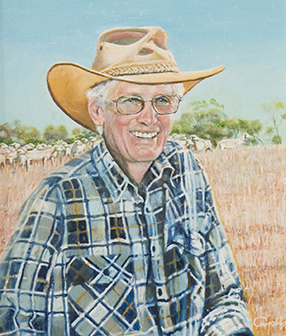 In the modern era, Dawson Bradford stands out among the most progressive, successful and exemplary farmers and agricultural administrators in Western Australia. He has multiple farming enterprises on his 4000+ ha property at Cuballing and plays a pioneering role in each of them through leadership and innovation that enrich both the knowledge base and credibility of each enterprise.

His cropping systems are innovative; his piggery has been a testing ground and demonstration site for new feeding, housing and farrowing technologies. But it is in his prime lamb enterprises that he is a true pioneer in a rapidly evolving industry. Not only are his sheep among the highest performing and best quality in the country but he is one of only a few agriculturalists Australia-wide who have contributed positively along the whole supply chain for this industry.

Since 2000 he has been chairman of the board of the WA Meat Marketing Cooperative and has overseen the transformation of a 30-year old statutory marketing organization, often struggling and beset with controversy , into a highly successful free-market cooperative. He actively participates in committees in government, local government, breed societies and scientific groups all of which benefit from his agricultural expertise and wisdom.