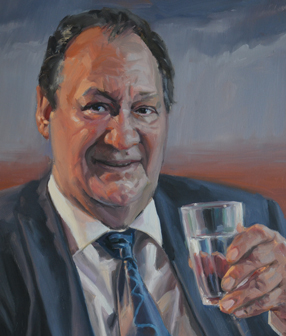 A feature of the history of Western Australian has been the capacity of its agricultural pioneers to grow crops and livestock successfully in spite of limited supplies of water. Ernie Bridge, as the new Minister for Water Resources in 1986, recognised that lack of water also affects the personal and social lives and wellbeing of rural Western Australians. As a result, he developed a plan that engaged farmers, business people and the government in a series of proposals that extended scheme water to over 2,800 farms in the following decade.

His unusual approach as a minister was inclusive, non bureaucratic, almost apolitical, and, as a result, highly effective. It was also widespread: farmers in areas as diverse as Moora-Bindi Bindi, Katanning- Nyabing-Pingrup, and Mount Magnet-Sandstone benefitted from the Rural Water Strategy that he put in place and directed as minister.

Ernie Bridge was the first Aboriginal Member of the Parliament of Western Australia and the first Aboriginal Cabinet Minister in any Australian Parliament. He proudly and successfully supported both his rural and Aboriginal heritage in many forums throughout his career but his vision and leadership are especially remembered by a large section of the wheatbelt of Western Australia because they resulted in his drought-proofing their social and economic life.