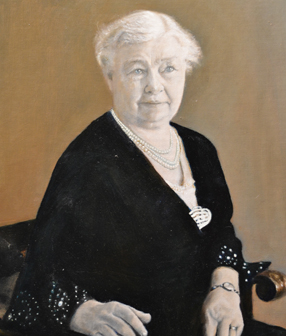 1861 – 1953 Maude Dempster was married at the age of 17 and widowed at 30. Left with six children and with no previous experience of farming, she successfully managed a property at Buckland in the Avon Valley, later moving to Grass Valley in the same district.  Dempster gained such respect that in 1906 she was made a life member of the Northam Agricultural Society.  A versatile and successful stockbreeder, she developed one of the first Merino stud flocks in Western Australia and was credited with introducing muscovy ducks and bronze wing turkeys to the State.  Remembered most for the quality of her Ayrshire cattle, she was also a noted breeder of horses both for the turf and as draught animals.  Her awards included a Department of Agriculture medal for butter production and the Governor’s Cup in 1902, the first woman to win the cup.