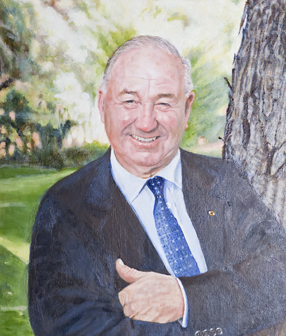 Farming the fragile soils of Western Australia is a constant challenge. After opening up huge tracts of land between the second war and the 1970s, farmers and others realized that their use of the land was not sustainable. From the early 1980s, the Landcare movement gave farmers the opportunity to redress the rampant problems of salinity, erosion and degradation of soil and Rex Edmondson was the face and a major driving force behind the development of Land Care.

He began his working life on his parents’ War Service Land Settlement farm in the newly emerging farming region of Jerramungup and realized that farming practices had to change if agriculture was to be viable the long term. He set up and chaired the Jerramungup Land Conservation District Committee, one of the first in the State.

Soon, he was serving on, and often chairing, a range of advisory committees and councils to both state and federal ministers about all aspects of Land Care and its administration. For example, he chaired the National Feral Animal Program based in Canberra and the Ord Bonapart Program, a joint Federal and Western Australian Government plan to assess the sustainable capacity of the region from Darwin to Fitzroy Crossing. At the same time he retained his dedication to his local community as a proactive councillor and shire president in the Gnowangerup, Jerramungup and, later, Albany shires.