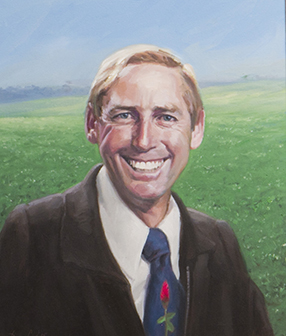 The development of agriculture on millions of hectares of relatively poor soils in Western Australia in the second half of last century centred around “sub-, sheep and superphosphate”. ‘Sub-‘ or subterranean clover was the source of nitrogen for cereals in rotations before artificial nitrogen fertilisers and it provided protein for sheep in the pasture phase of those rotations. Clive Francis was pre-eminent in all phases of the development of subterranean clover.

He was a brilliant, unconventional scientist with an outstanding rapport with farmers and his laboratory was never far from the paddock. He used laboratory and field trials to uncover the elusive isoflavonoid compound that caused some strains of clover to make sheep infertile and set up a unique laboratory to screen potential new varieties to ensure their suitability.

He expanded his activities to many crop and pasture legumes and collected, mostly from overseas, tested and released scores of new cultivars of clovers, medics, serradellas and vetches; an achievement that made him probably the most successful pasture legume breeder in Australia. His extensive, productive and long lasting international connections attracted many prominent overseas scientists to work with him and to contribute to the advancement of Western Australian broad-scale agriculture.