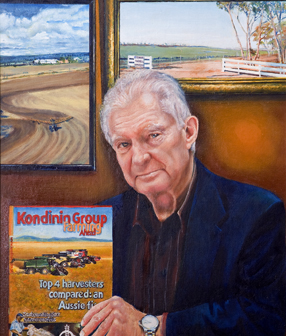 Farmers from all over Australia, many of whom may not know the town of Kondinin, are well aware of and appreciate the contribution the Kondinin Group has made to the agricultural welfare of this country. Bill Henderson was the driving force behind not only the founding but the promotion and development of this highly influential organisation. He oversaw its transition from a local pasture improvement group in 1968 to a broad based institution with branches in every state, shrewdly combining science and practical know-how to evaluate and improve farming practices, machinery, tools and ideas independently for the benefit of farmers. He was chairman of the group for five years, its promotion officer for 20 years and has been a life member since 1982.

The evolution of the Kondinin group reflects Bill Henderson’s own extraordinary farming career which started with 550 hectares at Doodlakine and grew to 16,000 hectares 30 years later. He was an “early adopter”, a successful innovator and a respected mentor who saw in his own success the opportunity to help other farmers develop their own expertise and knowledge of crops, animals, machinery and management.