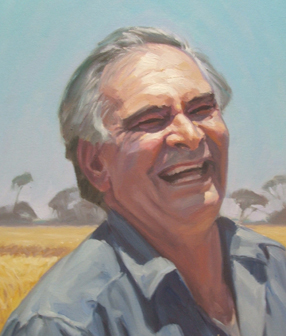 Kevin Hogan personifies the image of Western Australian farmers whose dedication to agriculture goes well beyond their own farm gate. As a successful and well respected farmer in the Bencubbin district, Kevin was well aware of the deep social and personal issues that beset many families and individuals in the wheatbelt.

He involved himself in community projects and was a founding member of important forums to improve the mental, physical and economic health of rural Western Australians. In particular, he initiated and was the founding chairman of the Mt Marshall Community Support Group which gave confidence and support to many farmers struggling to remain solvent in the face of crippling interest bills in the 1980s. The group became so successful in restoring the dignity of desperate families that it was used as a template for similar groups all over the State offering rural counselling. He was also a foundation trustee of the Country Medical Foundation set up to improve health services in rural communities.

At a corporate level also, he made strong contributions as a director and, for 16 years, deputy chairman of Wesfarmers, councillor of the grain Pool of Western Australia, Chairman of Bencubbin Farm Advisory Services and as a contributor to many rurally-orientated associations.