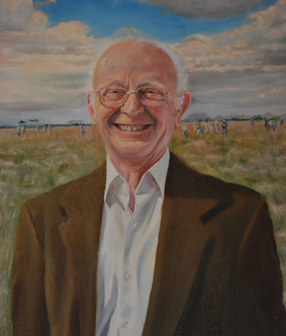 Clive Malcolm spent a lifetime convincing people, both scientifically and practically that salt-affected farm land could be made productive. His reputation as the “father of saline agriculture in Australia” grew as the problem of salinity relentlessly increased with time. His main focus was in Western Australia where he worked for 36 years as an officer in the Department of Agriculture and a further 16 years as a very active retiree.

But, he and his work also became well known overseas and he worked and lectured in Africa, North America, South Asia and the Middle East. He offered hope to desperate farmers facing the spread of salinity into their land by demonstrating that salt tolerant plants can thrive and be productive on salt-affected land.  As part of his research program, he headed the group that set up the world’s first major collection of salt tolerant plants. These plants were tested and the best of them subsequently released for farmers. Then, to enhance their cultivation, he became involved in the development and release of the Mallen niche seeder, the first specialized seeder for salt-land, and he developed soil treatments that improved germination. He then experimented successfully with the best ways of using the plants for feeding sheep to provide an income from this otherwise economically useless land.

He communicated well with fellow scientists and farmers alike and was involved at a high level in virtually every forum on the productive use of salt affected land including the Australian National Program on Productive use of Saline Land and the Saltland Pastures Association of WA. He was elected inaugural vice-president of the Saltland Pastures Association in 1997 and such was the esteem in which he was held by the members  he remained in that office until his death in 2006.