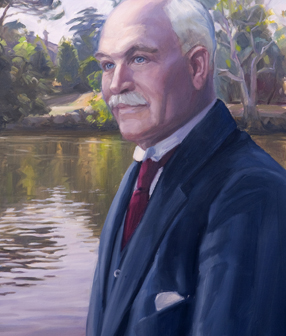 William Padbury’s contribution to Western Australia’s agriculture is the product of a long and astute liaison between business and farming that saw him achieve success in both. He began in business in the grocery trade in Oxfordshire, in his native England. Then, when he migrated to Western Australia at the age of 25 in 1892, he continued in his uncle’s Colonial Stores at Guildford. He took over the business soon after and developed it into one of the largest stores dealing in merchandise and agricultural produce in the State. This led to his becoming a major importer-exporter and his taking control of the famous Peerless Flour Mills to process wheat from his farmer clientele and his own holdings.

He developed his farming interests on a number of properties stretching from Three Springs to Dumbleyung and set up highly acclaimed studs of cattle, sheep, pigs, horses and poultry with astute breeding and importations from England and the Eastern States. He was a strong supporter of agricultural societies and The Royal Agricultural Society in particular of which he was president in 1913 and a member of its council for 51 years. The quality of his livestock was such that he won the Governor’s Cup eight times between 1912 and 1922.