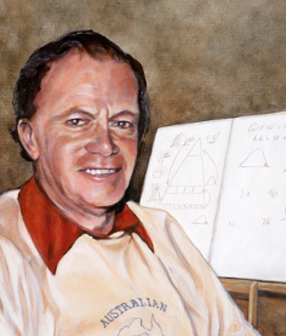 Jim Shepherd was a visionary breeder of Merino sheep who, in the 1960s challenged long held traditions in the industry by integrating measurement of fleeces and revolutionary methods of breeding into the industry. He was one of the first farmers in Australia to use these new scientific concepts of breeding and the most successful at the time in doing so on a large scale. In the 1970s, he fired the enthusiasm of over a thousand Western Australian and interstate farmers to join him and form a loose co-operative breeding organization, the Australian Merino Society or AMS. Members of the AMS began measuring the fleeces of their sheep for the first time and contributed animals to the overall breeding program which was by far the biggest in Australia. At the time, the concept flew in the face of tradition but his motivation was based on a belief in what he was doing and not on monetary gain. Neither he nor the members profited financially and prices set for breeding rams were low relative to those for traditionally bred stud animals.

By the 1990s, the concepts of measurement and scientific breeding that he pioneered were taken up widely by many sheep breeders outside the AMS. This, in turn, encouraged geneticists and other scientists to provide more extensive services to the breeding industry. The widespread genetic improvement of Australian Merino sheep owes much to his vision and tenacity.