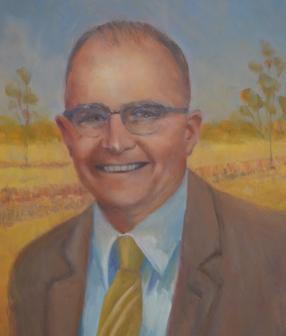 Hartley Teakle was one of a small band of early graduates in Agricultural Science at The University of Western Australia who studied overseas at the highest academic level before returning to make outstanding contributions to the development of Western Australian agriculture. In Teakle’s case, he obtained a PhD at the University of California in 1927 and then, back in Western Australia as a scientist with the Department of Agriculture, he pioneered work in trace element nutrition of crops that led to the release of complex fertilizers with micro- and macro-elements to increase crop yields throughout the State.

He was one of the first to warn of the impending danger of salt in the soils of the eastern wheatbelt and his extensive soil mapping of the area acted as a basis for rational release of land and the development of viable farm units in the Salmon Gums and adjacent regions. The work acted as a model for the more extensive soil mapping of the State, which was done in conjunction with other scientists. From this was prepared a system of soil classification that assisted in assessing the potential of new farming land, including that in the Ord River scheme.

In 1947, he became the first Professor of Agriculture at the University of Queensland and built on his Western Australian background as a soil scientist and plant nutritionist to complete a brilliant and productive academic career.