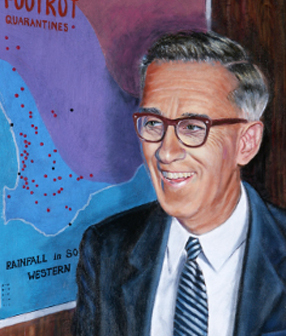 The animal industries in Western Australia owe much of their high level of freedom from disease to the bio-security programs put in place by Claude Toop. As a veterinarian with the Department of Agriculture for 40 years, 30 of them as assistant chief or chief veterinary officer, he oversaw the development of eradication or quarantine measures for most of the important exotic animal diseases. Our relative freedom from dangerous threats such as tuberculosis, buffalo fly, pleuro-pneumonia and brucellosis in cattle, footrot in sheep, swine fever in pigs and pullorum in poultry is largely attributable to his skilled direction.

Toop also provided the expertise for introducing myxomatosis into Western Australia in 1951 when the first rabbits were infected with the virus. For much of his working life until he retired in 1966, only a small band of veterinary colleagues were available to assist him. This encouraged Toop to instigate a cadet scheme in which young men were trained as veterinarians in eastern states universities. It not only provided trainees for the State Government veterinary services but also underpinned the foundation of private practice in the State. This scheme was the sole avenue to veterinary training for Western Australians until the veterinary school opened at Murdoch University in 1975, several years after his death.