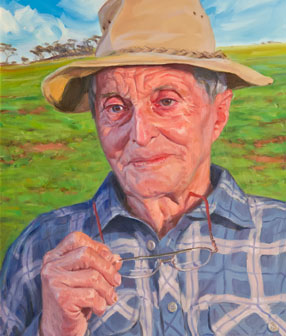 Les Hitchcock spent a lifetime promoting two of Western Australia’s important meat industries, pork and lamb. He played a key part in helping them progress from minor industries producing indifferent products for consumers and supplementary returns for farmers, to dynamic industries in their own right generating meat products of world-class quality. He took over the family farm at the Grass Valley in 1939 and began a Corriedale stud soon after for the production of lamb.

Later he began successful Berkshire and Landrace pig studs to produce pork. At that time, showing was the principle means of assessing and comparing excellence and Les’ stock excelled, enabling him to win the Governor’s Cup at the Perth Royal Show three times between 1970 and 1973. However, as objective measurement and new technologies became available, he embraced them and campaigned for their inclusion in payment and incentive schemes for producers. These schemes were the forerunners of the systems that are now in place and encourage the production of high quality lamb and pork. He was active in and became president of the State Prime Lamb Committee, later the Lamb Board, and was the producer representative on the Pig Meat Promotion Board.

His widespread, long-term activities included lengthy periods on the Northam Shire, the Royal and other Agricultural Societies, Breed societies, the Agriculture Protection Board and Junior Farmers, all of which benefitted from his wisdom and integrity.