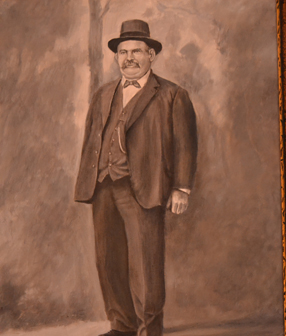 Wilhelm Liebe was already a highly skilled builder and contactor when he arrived in Western Australia in the early 1890s.  His works in Perth include His Majesty’s Theatre, The Peninsula Hotel and The Western Australian Art Gallery. In 1907 he turned his attention to wheat farming, taking up land in Wubin and Waddi Forest.

Clearing and developing on an unprecedentedly large scale, Liebe was a pioneer in the use of advanced machinery and his innovations were later copied by many smaller wheat farmers.  By the late 1920s he had more than 8,000 hectares under crop and grew a crop of 106,000 bags, then thought to be a world record.

During the 1930s depression he diversified into sheep and until his death at the age of 88 continued to provide a model of broad-acre farming.