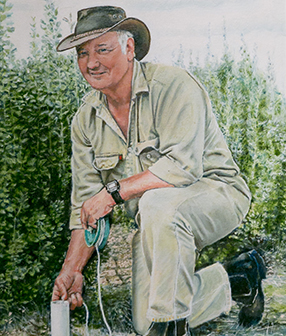 Michael Lloyd’s was one of thousands of Western Australian farms affected by salinity, probably the most important physical threat to the state’s agriculture in the 20th century. He set about understanding the problem and testing solutions through revegetation on a large scale on his own property.

With initiative and leadership, he realised the importance of sharing information as it became available and he established or led key organisations for that purpose such as the Saltland Pastures Association, the Animal Production from Saline Land Systems Initiative and several others. In these, he played an exemplary role as the active link between scientists working on the problem and practical landholders affected by it. This he achieved by organising innumerable field days and meetings throughout affected areas including on his own farm.

Farmers found first that they could repair scarred, salt-affected landscapes by using saltbush to lower the water table and, later, that the saltbush together with other species could re-establish productivity through managed grazing. These farmers in particular appreciate Michael Lloyd for contributing to both their psychological and economic welfare in the face of the potentially ruinous threat of salinity. And Western Australia owes him its gratitude for his contribution to sustainable agriculture in this State.