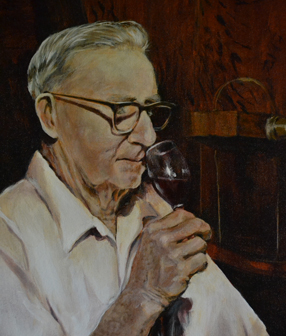 Jack Mann’s father, George Mann, who had been a brandy maker at Chateau Tanunda in South Australia, was appointed as winemaker to Houghton Wines in the Swan Valley in 1910. Jack became his apprentice in 1922 when he participated in the first of 51 consecutive vintages for the company.

He succeeded his father as winemaker in 1930 and, soon after, achieved the first recognition within Australia of the potential of Western Australian wines by winning the Australian Champion award for his fortified wines.  This award was won for 13 successive years. He strengthened this recognition in 1937 by producing the first vintage of the famous and highly successful Houghton’s White Burgundy which went on to win many Australian awards and is still a Western Australian icon.

One of his many lasting legacies was the innovative introduction of the Portuguese variety, Verdelho, which is particularly suitable for the warmer wine-growing areas of the State. Mann is considered by many to be the father of the Western Australian wine industry because of his innovations in both the wine room and in the vineyard, his mentoring of younger wine makers and his encouragement of the development of new areas for wine making in the State.