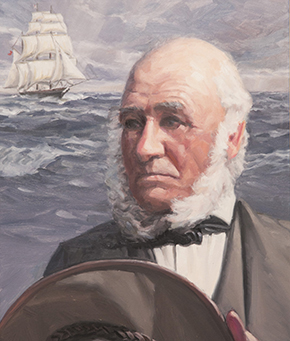 From a humble beginning this remarkable man became one of the most influential contributors to the first 80 years of Western Australia’s agricultural history. He arrived in the new colony as a 13 year old boy in 1831 with his father who died within months. He survived by working as a shepherd, then by dealing in livestock and then by acquiring agricultural land where he was a leading figure in opening up the new State and creating opportunities for others.

He owned land in St Georges Terrace, farmed livestock in Floreat, owned land at Guildford and established a large orchard in Thornlie. Eventually, he had holdings stretching from the Dardanup and Balingup areas in the south to the De Grey station and beyond in the north and including large holdings in Dandaragan, Geraldton, Toodyay, Gingin among others. Complementing this were his extensive trading activities, first as Perth’s leading butcher but later came a tannery, the Peerless flour mill, a tallow factory, even a sugar mill and an emporium with several branches supplying rural and urban needs.

Moreover, he established a shipping fleet operating coastal and international routes to connect rural Western Australia to Perth and to the world. He was a visionary, philanthropic and compassionate man and one of Western Australia’s greatest agricultural pioneers.