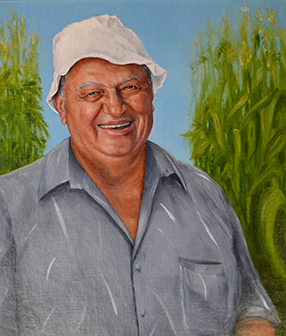 Western Australia’s climate is ideal for the production of irrigated vegetables but its transition from an industry of small market gardens to an efficient and important export industry was not realized until the late 1900s. Nicolas Trandos was at the forefront of this transition. He joined his father from Macedonia on a few hectares at Wanneroo after WWII and directed the family enterprise to grow into a major producer, processor and exporter of corn, beans, broccoli, carrots and other vegetables.

Importantly, he became a leader in the industry and took other progressive growers with him through his presidency of the Western Australian Market Gardeners Association for 25 years and of the Australian Vegetable Growers Federation. This enabled him to influence the introduction of advances to ensure the progress and viability of the vegetable industry such as a levy for research and the development of plant variety rights. Simultaneously, his breadth of vision saw the small farming community of Wanneroo-Joondalup, in which he grew up and worked, evolve into a large metropolis under his guidance during a record period as councilor, shire president and mayor.