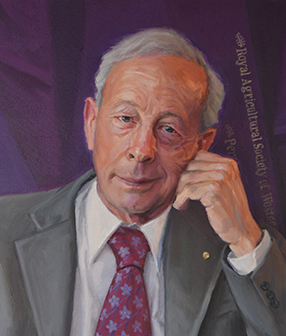 The Dairy Industry in Western Australia benefited in the period 1970 to 2000 from the imposing influence of Lou Giglia. As the son of Italian parents producing fresh milk in suburban Perth, he recognised that Western Australian dairy cattle could be as successful and productive as any in the country with skilful control of their breeding and husbandry. He illustrated this when he founded the Ponderosa herd of Holstein Friesian cattle in 1962.

Over the next 40 years his animals dominated in production figures and in show rings in Western Australia, where he won the Governor’s cup at the RAS three times, and the prestigious Queen’s Cup recognised Australia wide. He enthusiastically developed and used the latest technology for recording and breeding and the best farming and land-care practices on his property. More importantly, he shared this knowledge and success freely with others. His influence was far reaching through off farm commitments such as a directorship with Wesfarmers and roles in organisations as diverse as Junior Farmers, the Holstein Association of Australia, the Murray Shire and the Royal Agricultural Society. While president of the RAS, he conceived and established the Agricultural Hall of Fame and it is very appropriate that he is now a member.